I am not sure why the name Michael Sarrazin (1940 - 2011) should sound familiar. He was never a big star, but I know I have seen him in several movies and TV shows.  He was nominated for the 1969 Golden Globe award for Most Promising Newcomer, and in 1971 for a BAFTA in the same category, but he only has 68 titles listed on IMDb. Most Bit Actors have many more.

The next year he co-stars with Tony Franciosa (1928 - 2006) in another western, A Man Called Gannon. Funny, but I can't see Franciosa in westerns. I remember him from "Valentines Day" and "The Name of the Game" as a suave sophisticate opposite people like Susan Saint James (b. 1946).

Also in 1968 Michael works with James Caan (b. 1940) in another western, Journey to Shiloh. This must have been Sarrazin's western phase.

Here's a test for you. What 1970 film starred Paul Newman, Henry Fonda, Lee Remick, Michael Sarrazin and Richard Jaeckel? I didn't know it either, and I have never seen the movie called Sometimes a Great Notion. It is a story about a family of Oregon loggers...their lives and loves...but it may have been mired down by trying to be a drama, action, adventure, soap opera. Someday I'll look for it. (Maybe.) 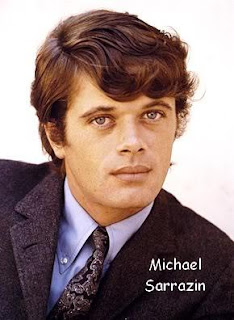 1975 brings another shot at stardom in The Reincarnation of Peter Proud, with Margot Kidder (b. 1948) and Jennifer O-Neill (b. 1948). Sarrazin has top billing and the title role, but it may just be too late. The next year he has another title role in The Loves and Times of Scaramouche, co-starring Aldo Maccione as Napoleon and Ursula Andress (b. 1936) as Josephine. See what I mean?

He does some more television work and even becomes a regular on "Deep in the City" a Canadian two season series. His final films are Arrival II (1998) and FeardotCom (2002). We won't even talk about them.

Even though the work of Michael Sarrazin wasn't stellar, he was a handsome man, who had a way about him that enhanced the films he was in. He was a true Bit Actor. Michael passed away in April 2011 after battling cancer.
Posted by Bit Part Blogger 9 comments: