Robert Young, with an H.

Here is a Bit Actor that had a good start, hit some tricky obstacles, went on to make some good movies, and died young. Robert Young, that is, Robert H. Young (1917 - 1951) was known in his later career as Clifton Young. 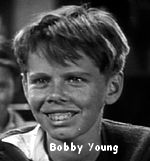 Clifton started out billed as Bobby Young in some Our Gang comedies as one of Hal Roach's Rascals. He was known as 'Bonedust' for some reason. His first short was called Better Movies (1925) and it starred Joe Cobb and the rest.

Bobby was able to work through the change from silents to talkies while at Hal Roach Studios. His first talkie was School's Out (1930). He also saw the switch of distribution of the Our Gang films from Pathe to MGM, which happened around the same time.

The 1926 silent short called Thundering Fleas was a Hal Roach comedy starring Our Gang, but it also included Oliver Hardy, Charley Chase and James Finlayson. This was one of many films Hardy made without Stan Laurel, although they were being billed as a team by that time. Roach kept Stan and Ollie on separate contracts for almost their entire stay at his company, so he could do what he wanted with them.

Toward the end of his Our Gang career, Bobby got to work with Jackie Cooper. I always wonder how associations like that affect the future of young actors. Bobby's final short with this group was (as far as I can tell) Little Daddy in 1931. He made at least 19 Our Gang films.

Now you have Robert Young who is 14 years old in 1931. He would find out that he couldn't continue his career with that name. Robert G. Young (1907 - 1998) has just made his debut in the Charlie Chan film, The Black Camel (1931). Since Bobby was never billed as Robert, he chose to use Clifton as his stage name. It was his mother's maiden name.

The name didn't really come in to play until later. Young made several films in the 1930's, but he was uncredited in them. He went off to war, as all 24 year olds did, and started acting again in 1945. His post-war debut was in a 13 episode serial called The Master Key (1945) starring Milburn Stone (1904 - 1908). Stone, of course, would become famous as Doc Adams on "Gunsmoke." Young was in episodes 7 and 8. The serial had a great tag line, "Government agents battle a gang of Nazis who are trying to use the Orotron machine, which can turn seawater into gold."

One thing about writing a blog like mine is that I bump into films I think I would love to see. I guess I will have to keep looking, but there are so many. Clifton had a small part in one of those missed films I am putting on my list. Deception (1946) is a Bette Davis, Paul Henreid, Claude Rains Film Noir with Young as a taxi driver. Could it get any better? It even has Benson Fong, another great Bit Actor.

In the 1940's there was a series of short, instructional comedy films with a character called Joe McDoakes. They starred George O'Hanlon and totaled 63 entries that extended to 1956. Clifton Young would show up in several of them from So You Want to Play the Horses (1946) to So You Want to be an Actor (1949). O'Hanlon would go on to fame as the voice of George Jetson in "The Jetsons." 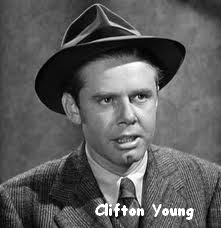 Young is now employed as a contract player at Warner Brothers. Not bad. He is working with Ann Sheridan, Robert Mitchum, Joan Crawford, Van Heflin, and other big stars. I'll stick my neck out and say that his finest role (possibly after some work in Our Gang) was as Baker in Dark Passage (1947) starring Lauren Bacall and Humphrey Bogart.

Also in Dark Passage is Bruce Bennett, who I wrote about recently. Young and Bennett also worked together in Nora Prentiss (1947) and The Treasure of the Sierra Madre (1948). Some great films, even though the roles for Young were small. In Treasure, he played a bum in the flop house and had no lines.

Clifton also made a few westerns. His best was most likely, Blood on the Moon (1948) starring Robert Mitchum and Barbara Bel Geddes. Another film I should look for.

The rest of Clifton's films are watchable. No blockbusters, but good films I would turn on if they were on TV. Borderline (1950) with Fred MacMurray; Bells of Coronado and Trail of Robin Hood, both 1950 Roy Rogers films; to his last film, Love Nest (1951), with Marilyn Monroe. I just saw that one, and I never saw Clifton in it.

Sadly, Clifton Young died while smoking in bed at age 33. He had quite a career in his short life, and he brought his talent to some great films, including my favorite film, Dark Passage.
Posted by Bit Part Blogger 3 comments: