First of all, Happy Anniversary to the Drive-In Movie! It was 79 years ago today that the first drive-in opened in New Jersey. Where are they now?

Eric Roberts (b. 1956) is a very experienced actor, but I had never taken notice of him before. He is also Julia's older brother. Eric sports 245 titles on IMDb, compared to his sister's 50 roles, but I bet she made money money! That alone probably makes him a Bit Actor. Julia won an Oscar and has 39 other awards. Eric was nominated for an Oscar and won 3 other awards.

Eric started his career on the stage and moved into television work in 1974. His first movie was King of the Gypsies (1978) starring Susan Sarandon and Judd Hirsch. Next came Raggedy Man (1981), starring Sissy Spacek (b. 1949) and it was a big opportunity. He would go on the star in several movies, but his career never fully carried him to real stardom. His next movie, Star 80 (1983) would bring him some notice among casting directors. Star 80 also brought his first award as Best Actor by the Boston Society of Film Critics.

In 1984 he starred with Mickey Rourke and Daryl Hannah in The Pope of Greenwich Village. By this time, his character was becoming known as the brooding young man with a gravelly voice. It worked well for him.

In 1985 he was nominated for the Best Supporting Actor Oscar in Runaway Train, starring Jon Voight. He was also in Nobody's Fool (1986) co-starring Rosanna Arquette (b. 1959). Not long after these good parts, he made more movies like Rude Awakening (1989) with Cheech Marin. Definitely a step down.

By the late 1980s, Eric had fallen from popularity and was taking roles that didn't do him any good. He was fighting with drug addiction, but he managed to get himself straightened out. He married Eliza Garrett, now Eliza Roberts, and they have appeared on screen together at least 20 times. Eric also worked once with Julia in Blood Red (1989), which was also not very good.

Some better roles started coming Eric's way. He played a dark character, well within his grasp, in Final Analysis (1992) starring Richard Gere, Kim Basinger and Uma Thurman. Not bad, and also a pretty good movie! He also appeared in The Specialist (1994) with Sylvester Stallone and Sharon Stone, though this is not one of my favorites. 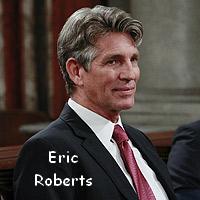 Eric has now started pouring on the work. Previously making 4 or 5 movies a year, he turns out 14 movie and TV titles in 1996, including the role of Perry Smith in the mini series "In Cold Blood" from Truman Capote. 14 titles a year would repeat in 1999 and 2001. He does some fine television series work in "C-16: FBI," "Falcone," "Less Than Perfect," and "Heroes." Most recently you can find Eric in "The Young and the Restless."

Eric was also making many, many movies, but no real hits, and no real big roles in blockbusters. But does that really matter? He is working, and working very hard. For an actor who loves his work, that is all that matters. For movie and TV fans, it presents a challenge to see how many times you can recognize Eric Roberts when you see him. Maybe you can start a notebook.

We just recently saw Eric and his wife, Eliza, in a great kid's movie, First Dog (2010). Eric and Eliza played the president and first lady, but he still came across as the brooding character he used to play so well. I doubt that I would have voted for him, and when he first appeared on the screen I thought, 'That's the president? He looks like trouble.' He turned out to love kids and dogs, so I will give him a chance.

Most of Eric's awards and nominations came between 1979 and 1986, his best years. He is now starting to gather a few new ones, with a 2012 win in the L.A. Indie Awards for Silver Case (2011). On IMDb he lists 34 projects that are not yet released, including Lovelace, the bio pic about Linda Lovelace that was originally to go to Lindsay Lohan, but will star Amanda Seyfried. Keep up the good work, Eric! Maybe stardom can still be yours.
Posted by Bit Part Blogger 5 comments: