Here's another face that everyone knows. I was watching a 1958 episode of "Have Gun, Will Travel" and it began with the hotel desk clerk talking with Paladin. I knew his face instantly, but couldn't recall the name. So I waited for the credits...and I STILL didn't know his name!

Olan Soule (1909 - 1994) has 238 titles listed on IMDb. His screen career spans over four decades and his last name is pronounced So-LAY, in case you are wondering. He started acting on radio when he was just 17 years old. No relation to David Soul (b. 1943), but Soul is another Bit Actor.

Olan's first movie was an uncredited Bit part with Doris Day (b. 1924) in It's a Great Feeling (1949). Also that year he narrates a Bette Davis/Joseph Cotten film-noir called Beyond the Forest. A radio background is a good start for narrators.

In the early 1950s he works in more films and some early television. Included in his films were Ma and Pa Kettle Go to Town (1950), The Day the Earth Stood Still (1951), The Atomic City (1951), Monkey Business (1952), Stars and Stripes Forever (1952)...it just occurred to me that some readers may not know much about some of these movies. I try to mention some of the more popular titles in my posts. In any case, any movie I mention in my blog is worth watching. Of course, as a movie blogger and Bit Actor fanatic, there are very few movies I consider not worth watching. The rest is on you.

I must mention that Monkey Business is really a Cary Grant/Ginger Rogers film, with an early Marilyn Monroe. Monroe plays a character named Lois Laurel. That's Stan Laurel's daughter's name. I have met Lois Laurel. She is very nice, but doesn't quite look like Marilyn.

1952 was a good year for Olan. He started working on a television series called "Dragnet" starring Jack Webb. At first he was just another cop, but he soon became the forensic expert, Ray Pinker. Olan had done television work before, and he would continue on the small screen through his entire career.

In 1954 he was a regular on "Captain Midnight" with another great Bit Actor, Sid Melton (1917 - 2011). I'll have to write about Sid. Then, Francis in the Haunted House (1956) was the last of the mule pics. I will try to touch base with some of Olan's television work, but let's stick to the big screen for a bit more.

North by Northwest (1959) may be the finest production in which you will find Soule. He plays an assistant auctioneer and he does not get screen credit. The next year he is in Bells Are Ringing with Judy Holliday and Dean Martin.

In 1962 he is an elevator operator in Days of Wine and Roses. It appears he is not getting decent roles in movies, but on TV he is found everywhere. Actually there isn't much more to talk about as far as Olan's movies. In the 1970's you will find him in The Apple Dumpling Gang (1975) and The Shaggy D.A. (1976). Soule's final film was Homicide in 1991, starring Joe Mantegna and William H. Macy, and he played a forensic detective similar to what he did on "Dragnet."

Olan Soule is best known for his work on television. He had a range of expressions and a big, fluid voice that worked well on the small screen. People who met him were often disappointed because he was so slight but performed with such a big voice on radio. After his success on "Dragnet" and "Captain Midnight" he was sought by producers for more guest roles on TV. 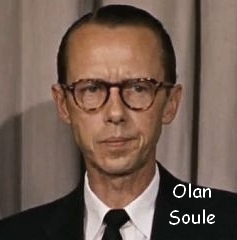 The bulk of his work and all of his important roles were on television, and he would appear in all genres with multiple appearances on such diverse shows as "The Real McCoys" to "One Step Beyond." He must have been popular with Jack Benny as he appeared on his show multiple times from 1958 to 1961.

Olan has multiple appearances on "Bachelor Father," "Alfred Hitchcock Presents" and "The Alfred Hitchcock Hour," "The Untouchables," "77 Sunset Strip," "Mister Ed," "The Andy Griffith Show," "Perry Mason," "My Favorite Martian," "The F.B.I.," "Petticoat Junction," "Gomer Pyle: U.S.M.C.," and "My Three Sons." And that only takes us up to 1970...plus, it EXCLUDES the westerns he was in!

Soule was the first voice of the animated Batman in 1966, and continued that gig for almost 20 years. He even voiced Batman in "The New Scooby-Doo Movies."

His westerns included all of the best series', including "Sugarfoot," "The Rebel," "Wanted: Dead or Alive," "Stagecoach West," "Rawhide," "Bonanza," "Gunsmoke," etc., and the aforementioned "Have Gun, Will Travel."

Olan Soule appears on screen hundreds and hundreds of times, and you can't miss him. Even when he is a ticket clerk, working in a bank, or a traveling salesman. Somehow he always stands out from the rest of the Bit Actors all around him.