I suppose that you know by now of my interest in history.  Film history is only one area of research for me.  My wife and I have been studying all sorts of history.  We even had our honeymoon in Gettysburg, PA.

A film series as popular and successful as James Bond had to have a history.  Everyone knows that Ian Fleming (1908 - 1964) wrote the stories about the British super secret agent known as 007.  It is fun to dig a little further.

Fleming wrote 13 novels and two story collections about James Bond.  According to Wikipedia, there have been 22 Bond films released, with a 23rd in the works for release next year.  They also state that the total box office take (so far) has been over $4.8 BILLION.  I'd call that successful.

The very first Bond novel was Casino Royale, written in 1952.  It is also the very first story used for a screen appearance of Bond, but here is where history gets to be fun.  In 1954, Casino Royale was presented on live television, making it Number One of the complete set.  I saw it for the first time this week.

Fleming reportedly sold the story rights for $1,000.  The story was then Americanized.  James Bond became Jimmy Bond, played by Barry Nelson (1917 - 2007), and he was an American spy.  He receives additional help from Clarence Leiter (name changed from Felix Leiter) who was a British spy.  In the later movies and the books, Leiter is American.  You can read my post about Leiter here.

The first Leiter was played by Michael Pate (1920 - 2008), and they spelled his character's name wrong in the credits, as Clarence Letter!  We also see the wonderful Peter Lorre (1904 - 1964) as Le Chiffre, our ruthless villain.  Nelson only took the role as Bond so he could have a chance to work with Lorre.

The female lead was played by Linda Christian (b. 1923).  She gets to kiss Bond, but there is no other hanky-panky.  It was only a one hour program!  She was good in the role as a double agent who lets emotion get involved in her character.  Well done for 1954 television.

The special edition set shown in the Amazon link above includes the 1966 spy spoof, Casino Royale, and also the 1954 TV presentation.  It is well worth owning.  It also has an interview with director Val Guest (1911 - 2006) who tells about the confusion of making the psychedelic movie. 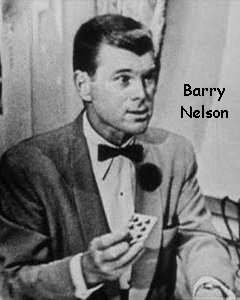 In 1954 we had a lot of teleplays presented, and they included some big stars from Hollywood.  "Casino Royale" was one presentation of a series called "Climax!" which aired from 1954 to 1958.  The only problem is that video tape wasn't perfected yet.  Shows were either filmed for later editing and then broadcast, or they were presented live.  Most live shows were recorded on kinescope.  It is a rather crude process where a film camera is aimed at a television monitor.  The results are usually contrasty and have dark halos around some subjects.

The kinescope of this teleplay was lost until 1981 when Jim Shoenberger found it in his collection.  It was labeled "Casino Royale," but he thought it was the 1966 film.  When he saw it was black and white film, he looked more carefully.  Lucky for us this piece of history was re-discovered.

The copy has been released and is worth watching.  The story moves quickly, and it has the telltale signs of being a kinescope, but I enjoyed seeing it.  It is typical of teleplays in the 1950s.  You can tell that the sets are small and whenever you have something live on TV, someone will drop a line or fumble a word.  That's what makes it all so special.
Posted by Bit Part Blogger 4 comments:

MARJORIE BEEBE is largely forgotten today but in her time she was quite a star. Mack Sennett is on record as saying he believed she had the potential to be the greatest movie comedienne of them all. That’s praise indeed coming from the King of Comedy.

Beebe was a Missouri girl and the family moved to California when she was in her teens. She quickly became known at local cinemas and then at the studios; she was determined to become a movie star. She started out at Universal but soon moved to Fox and appeared in a number of their silent features. At first she played support to other actresses, particularly Madge Bellamy, but her talent for comedy was becoming apparent and she was given her own vehicle in 1928, The Farmer’s Daughter (Arthur Rosson, dir.). She got rave reviews for this; more than one newspaper suggested that she was the best comic actress seen for a very long time.

Mack Sennett was similarly impressed and within the year Beebe had left Fox and joined him. Her work with Sennett was different in two significant ways. Firstly with one solitary exception she stopped appearing in features. Sennett’s speciality was the two reel short and she appeared in at least forty over the next four years. Secondly and perhaps more importantly she was now in talkies. Sennett was experimenting with the new form and Marjorie Beebe was highly versatile. She was adept at old-style slapstick and a mistress of the pratfall. But she was also great with a wisecrack or a put-down.

She would become Sennett’s star turn and two reelers would be written and named for her. She had her own screen persona, Marge Martin (daughter to Andy Clyde’s Pop Martin) but played any number of other roles too, usually on the sassy side…intrepid reporters, flirty wives, gangsters’ molls, club hostesses. Of particular interest are Cowcatcher’s Daughter (1931, Babe Stafford, dir.), Sennett’s nod to The Farmer’s Daughter, which is regrettably lost, with Beebe as a sassy cowgirl; and Doubling in the Quickies (1932, Babe Stafford, dir.) where she plays a Hollywood wannabe much as she had once been herself.

Mack Sennett went bankrupt in 1933 and Beebe’s career went into freefall with him. She went back to features and acted support in a few Westerns but her talents were wasted. She had always been a party girl and a drinker and Sennett had been the one man who seems to have been able to handle her. The second half of the 1930s were not a happy time for her; she had at least three unsuccessful marriages. She retired permanently in 1940 and finally began to find contentment again with her last husband well away from the spotlight.


Many thanks to Ian for his insight into ages past and a star who's light would only shine for a short time on the silver screen.
Posted by Bit Part Blogger No comments:

A few months ago I posted about Andy Clyde (1892 - 1967).  His is a well known name in film and TV.  I received an e-mail from a chap in London who told me about Beebe.  He was actually writing a short bio of her for a magazine at the time, which has since been published in the Journal of Popular Culture.  His name is Ian Craine.

Marjorie Beebe appears in 79 titles from 1926 to 1939, and was a staple in over 40 films with Mack Sennett, who gave her a real chance starting in 1929.  She made 17 films with Andy Clyde, and played his daughter in many of the 'Pop Martin' movies.

Beebe moved to Sennett in 1929 and her first film there, also with Andy Clyde, was called A Hollywood Star.  About ten of these early films also starred Harry Gribbon (1885 - 1961) who had a long movie career of over 150 films.

Beebe only made one feature while at Sennett.  Hypnotized in 1932 starred the comedy team of George Moran and Charles Mack, a vaudeville act who worked in black face as the Two Black Crows.  Marjorie played a maid, so it must have been a Bit Part for her.  The movie does not get very good reviews.

Her last films with Sennett were released in 1933, and she made a few pictures with other studios until her last appearance on film in Hollywood Cavalcade (1939) starring Alice Faye and Don Ameche.  She played a silent film telephone operator.

So there are the 'nuts and bolts' of Marjorie Beebe to give you some background.  On Thursday I will post a bio of her that was written by Ian Craine specifically for me (and you).  I am sure you will find it interesting and informative.

Actors like Beebe should be remembered for their contribution to the film industry.  Who knows how many people she may have influenced?
Posted by Bit Part Blogger No comments: