What is a classic movie? I know that the Classic Movie Blog Association has tried to address that question. I don't think there is a definitive answer. It's like asking which movies are good and which are bad. It all really comes down to which movies you like and which you don't. I am sure that Twelve Monkeys (1995) fits into all of the above categories. Some people like it, some hate it, and some think its a classic.

What I like about Twelve Monkeys is that it was filmed in Philadelphia, so I recognize most of the locations used. These include Eastern State Penitentiary, the derelict Metropolitan Opera House, Philadelphia's City Hall, the Philadelphia Convention Center, and Wanamaker's department store which is now a Lord and Taylor. I have said that a Bit Actor adds color, information and atmosphere to a film, and these locations do just that.

I also like Madeleine Stowe (b. 1958), Bruce Willis (b. 1955) and Brad Pitt (b. 1963) in this film. Pitt was nominated for an Oscar for Best Actor in a Supporting Role, and won several other awards including a Golden Globe. Director Terry Gilliam (b. 1940 and the only American Monty Python) is a favorite as well, and did a fine job here. Lastly, there are loads of Bit Actors employed in this large film, so what's not to like?

This film is over 15 years old now. That means that many of the actors were not well known at the time of filming. Brad Pitt had just come off some of his early hits, Interview with the Vampire: The Vampire Chronicles, Legends of the Fall, and Se7en, all in 1994 or 1995. He was just becoming a star.

Monkeys also has a number of well known stars in Bit Parts. Frank Gorshin, David Morse and Christopher Plummer all appear in less than large parts. But they bring great performances to their roles and help to create that surreal feeling that Gilliam must have wanted.

Jon Seda (b. 1970) who played Jose in this movie, went on to play some major roles, including the great WWII mini-series "The Pacific" on HBO, and several other TV series'.

Christopher Meloni (b. 1961) plays one of the scientists. With 60 titles listed on IMDb, he has worked on several TV series, but not many major motion pictures. Look for him with Richard Gere and Julia Roberts in Runaway Bride (1999), and Gere with Diane Lane in Nights in Rodanthe (2008). 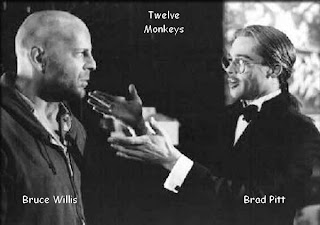 Simon Jones (b. 1950), is a Brit who appears on several British television series, including "The Hitchhiker's Guide to the Galaxy" and "Brideshead Revisited." He was in Brazil (1985) which was Terry Gilliam's first movie as director without the cast of Monte Python. He also appears in The Devil's Own (1997) with Harrison Ford and Brad Pitt. All small parts. He later goes uncredited in The Thomas Crown Affair (1999) with Pierce Brosnan and Rene Russo.

Is Twelve Monkeys a classic? Is it a good movie or bad? It is a complex story that requires your full attention as our hero travels from the future to be wounded in WWI, and then bounced to our era twice. The acting is first rate, even though it may not appeal to every taste. The truth is, there are no bad movies, just the ones you may not like. I like this one.

One last note. I am sorry I was absent last week but we were vacationing in San Diego! A lovely, historic city. Have a great Memorial Day weekend, and I'll be back next week.
Posted by Bit Part Blogger No comments: