The Big House and Chester Morris

Sometimes I wonder how my brain works.  In idle conversation last week, a friend of ours was mentioning that she didn't want a big house.  That got me thinking about the 1930 gangster movie, The Big House, starring Chester Morris (1901 - 1970) and Wallace Beery (1885 - 1949).  Now you are probably wondering how my brain works.

I haven't seen The Big House in quite some time, but I remember the movie as being quite gritty, almost artsy in the filming.  Early talkies had less than optimal sound and that added to the dark feel of the film, and the hopelessness of being in prison.

Chester Morris started acting on the stage and made a few silent films from 1917 to 1925.  His first talkie was Alibi in 1929, and he had the starring role.  He was also nominated for an Academy Award for Best Actor in that film.  He was now off on a movie career as a star.


The Big House was the next year, and it was also a big hit.  Morris played many gangsters and detectives in the decade of the 1930s, co-starring with a fine bunch of popular stars.  By 1940, he was losing his stardom, and I think we could categorize him as a very popular Bit Actor from that time on.

The next decade saw him in B-movies, including a series of Columbia films where he played Boston Blackie.  I believe they made 14 Blackie films in the 1940s, and this is where Morris is best remembered.  I should take a closer look at the full cast of these films, because they are one of the best sources for great Bit Actors. 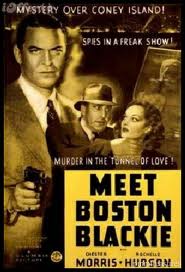 Boston Blackie's Chinese Venture (1949) was his last in the series.  It starred Morris and Richard Lane (1899 - 1982) as Insp. Farraday.  This would also be Morris' last movie in a starring role.

The 1950s brought television, and Morris was seduced by the dark side.  In fact, I only counted three movies on IMDb from 1950 to 1970 for him.  The rest was TV.  I am sure his name was remembered by the new television audience, so this was probably a good move for him..  His movie career hadn't made him another Bogart or Cagney, and television was rapidly taking over the leisure time of the new bunch of younger viewers.  (Including me.)

Morris shows up in many of the teleplays that were popular in the 1950s.  Shows like "Omnibus," "The Phillip Morris Playhouse," "Studio One in Hollywood," "Playhouse 90," and "The United States Steel Hour."

The 1960s brought many new series' to TV, and Chester obliged by appearing in "Rawhide," "Naked City," "Route 66," "Suspense," and "Dr. Kildare."  I am amazed that Morris was able to shape his career so neatly into decades!

His final role was a movie, The Great White Hope (1970) starring James Earl Jones (b. 1931) in his fourth film.  Chester Morris passed away in 1970, a victim of an intentional overdose while he was suffering from cancer.  His death took place in New Hope, PA, which is not too far from where I live.

I wonder if he knew how much pleasure he brought to his fans over the years?  I certainly hope so.
Posted by Bit Part Blogger 8 comments: