B4 They Were Stars - Leonard Nimoy

I am hoping I haven't bitten off more than I can chew today. I have chosen to write about the early career of one of the most well known actors in Trekdom. Leonard Nimoy (b. 1931) was, at one time, a Bit Actor.

Nimoy started acting in children's theater in Boston. His first screen appearance, according to the all-knowing IMDb, was in Queen for a Day (1951). Queen was a movie based on a radio program called "Queen for Today" and would eventually become television's "Queen for a Day" that ran from 1956 to 1964, hosted by Jack Bailey (1907 - 1980). I know I was a weird kid, but I used to watch it. They would pick a woman (usually an older woman) out of the audience and honor her with wonderful gifts like a new washer and dryer. She got to sit on a throne with a cape, tiara and a bunch of roses...tears of happiness flowing! What fun!

Also in 1951, you can find Nimoy in Rhubarb, a movie about a cat that inherits a baseball team. I haven't seen Rhubarb, but with Ray Milland, Gene Lockhart and William Frawley in it, it can't be too bad. The next year we see Nimoy in the title role of Kid Monk Baroni, another movie I haven't seen. This one includes Bruce Cabot (1904 - 1972), veteran Bit Actor and star of King Kong (1933).

No one could argue that 1965 wasn't THE golden year for Leonard Nimoy (when he became Mr. Spock in the pilot for "Star Trek"), but 1952 was a good one as well. After he played Kid Monk, he was cast in the serial, Zombies of the Stratosphere. What a cool title. And it was 12 chapters, ample time to hone your career as a space traveler/actor. 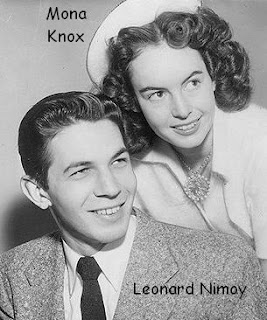 Next look for Nimoy in the third installment with the famous talking mule called Francis Goes to West Point (1952) with Donald O'Connor. In Old Overland Trail (1953), Nimoy plays a Native American chief, and a bad guy. This was a Rex Allen (1920 - 1999) film and the first time we see Nimoy in the red man's makeup.

Let's stick with his movies before we talk about television. Nimoy plays a military man in Them! (1954). I don't remember what happens to him, but I hope the ants didn't kill him. From zombies to giant ants, and in his next film he gets to work with parasites from the center of the Earth. The Brain Eaters (1958) was not as good as Them!


Leonard only made two more films before reaching the stars in 1966. The artsy Shelley Winters, Peter Falk film, The Balcony (1963), and the forgettable Deathwatch (1966). Both were adaptations from Jean Genet (1910 - 1986) plays, so I suspect it was Nimoy's intellect that caused him to take the parts. Or perhaps he was connected to the author in some way. I don't really know. These films are a far cry from zombies, ants and brain eaters.

In the early 1950s, Leonard started working on the small screen in a big way, first appearing in teleplays like "Four Star Playhouse" and "Fireside Theatre." You can find him in many of the early series' such as "Navy Log," "Broken Arrow," "West Point," " and "Highway Patrol." He worked in many westerns as well, "Cimarron City," "The Rough Riders," "Colt .45," and "Tombstone Territory," sometimes as a Native American.

I wonder if he knew Lloyd Bridges well. He appeared at least eight times on "Sea Hunt" but not in a regular role or as the same character. He also shows up multiple times on "Wagon Train" as Hispanic and Native American characters. Could it be the ears?

He has a single appearance on "The Twilight Zone" and shows up on "The Untouchables," "Perry Mason," "Dr. Kildare," and two episodes of "The Outer Limits." Multiple appearances on "Kraft Suspense Theatre," "The Virginian," "Combat," and "Gunsmoke" made him ready to take on the galaxy in "Star Trek."

I suspect that his television work did more than his movie experience to help prepare him for the variety of situations he had to portray as Mr. Spock. When you throw alien worlds into your everyday life, almost anything can happen.

Leonard is now 81 years old, and he is still working to some extent. He does some voice work, and I am sure he would still take the right part for TV or a movie if it came along. I was 16 years old when "Star Trek" debuted, and Mr. Spock affected me as he did so many others at that time. I have been a lifelong Trekker, mostly because of Leonard Nimoy rather than William Shatner. So Mr. Spock...live long and prosper.