Laurents was a playwright, director of the stage, and a screenwriter.  He never acted, but he is responsible for advancing many careers, including that of Barbra Streisand.  He has won two Tony Awards and several other awards for theater and film, and was a nominee for many more.  Plus, he is credited as a writer on a real A-List of movies, even though film was not his primary work.  He was even blacklisted for a while.

His film career started with the 1948 release of The Snake Pit, starring Olivia DeHavilland; and Rope, by Alfred Hitchcock.  Other big name stars include Katherine Hepburn and Rossano Brazzi in Summertime (1955), and Ingrid Bergman and Yul Brenner in Anastasia (1956).

Laurents was the man who wrote the book West Side Story, released as the musical film in 1961, the winner of TEN Oscars.  The next year, was the release of Gypsy, also from a Laurents book.  Gypsy starred Natalie Wood (1938 - 1981), and was remade for TV in 1993 starring Bette Midler with Cynthia Gibb (b. 1963) in the title role.

Into the 1970s, with The Way We Were (1973) starring Streisand and Robert Redford, and then The Turning Point (1977) starring Anne Bancroft and Shirley MacLaine.

With timeless stories like those, we are sure to see his name in movie credits for years to come.  In fact, he wrote many plays that may still become movies.  Arthur Laurents has brought a lot of beauty into our lives, and he is responsible for keeping countless Bit Actors working as well.  (I had to get something about Bit Actors in here!)
Posted by Bit Part Blogger 2 comments:

News just came out today of the death of Yvette Vickers (1936 - 2011) a Bit Actress of some note.  After working in commercials, Yvette grew a list of 40 titles on IMDb, starting in 1950 as a Giggling Girl on the Phone in Sunset Blvd.

She was beautiful, and was a Playmate of the Month for July 1959, but her acting career never gave her a starring role in any big hits.  After Sunset Blvd. she did some extra work on TV and in some movies.  She was also romantically involved with Jim Hutton and no less than Cary Grant.

In 1957 she had a big break with a better part in Short Cut to Hell.  This was James Cagney's directorial debut, and also his last stint as director.  The movie flopped, and so went Yvette's career.

I guess she wasn't much in demand so she started taking parts in B-movies and Sci-Fi thrillers.  Who knows why that happens?  Perhaps she wasn't very good as an actress, or maybe there were just too many other beautiful starlets to choose from, and she wasn't motivated enough to push through the casting director's door.

We next see her in The Sad Sack (1957) starring Jerry Lewis, but she is way down the cast list.  Roger Corman directs her in I Mobster the next year, where she plays 'The Blonde.'

More onesies and twosies as a guest star on TV, including two episodes of "Dragnet" where she probably looked great giving Joe Friday the facts.

Her next movie role was Attack of the Giant Leeches in 1959, again with Corman.  This was pretty much a starring role, but who wants to be attacked by giant leeches? 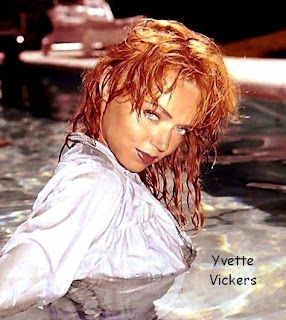 Maybe the 1960s looked a little brighter for Yvette.  She had small parts in Pressure Point (1962) starring Sidney Poitier, and HUD (1963) starring Paul Newman.  She even got to play a 'Yoga Girl' in Beach Party (1963) with Frankie and Annette.

Her last film was Evil Spirits in 1990.  I am sure that by that time, she was showing signs of mental illness.

She became a recluse after that, and she was sure she was being stalked.  I read that she rarely left her house.  Her decayed and mummified body was just found last Friday, with old mail filling her mailbox.  Here is the news story.  She could have been dead for almost a year.

The sad thing is that she was still receiving letters from fans of her old movies, and they just wanted to let her know how much her work was appreciated.  Movies like the two Attack films (50 foot and leeches) will not be made again in the same campy style of the 1950s.  Yvette Vickers may only have been a Bit Actress, but she made a mark on many film lovers.
Posted by Bit Part Blogger No comments: