Jack Elam (1920 - 2003) is one of my favorites. (And  have a lot of favorites, as you well know by now.) Jack started in the entertainment field as a bookkeeper at Goldwyn Studios. He apparently traded some accounting work for a few small parts on the big screen, and that was the start of a movie career that spanned over 200 roles.

He was blind in one eye, the result of a childhood accident, and that made him a bit different, and quite valuable as a heavy or other character actor, especially in westerns.

Elam's early career was filled with B westerns and dramas where he could play the bad guy. He worked with many stars, such as Chill Wills, Jeff Chandler and Walter Brennan, managing 53 movies between 1944 and 1960.

Around this time we start to see Jack on television. He is on early episodes of "Mr. and Mrs. North," "Waterfront," "The Adventures of Rin Tin Tin," and "The Lone Ranger." Later in his career he was on almost everything western, and plenty more.

Back to his bad guy roles, Jack played Tom McLowery in Gunfight at the O.K. Corral (1957), and the same year he was Fatso Nagel in Baby Face Nelson with Mickey Rooney in the title role.

Most of Elam's work would soon be on television. This was the era of TV westerns and they always needed a bad guy. As far as movies, his first of two films with John Wayne was The Comancheros (1961). He also made Rio Lobo with Wayne in 1970.

In 1963 he works again with Dean Martin in 4 For Texas, but his career would change in 1969 when he is cast in a much larger comedy role in Support Your Local Sheriff! starring James Garner. He would now begin to receive offers with his funny side in mind. His previous experience as a villain would play into these roles. He had the look, and that bad eye, to counter-play against a funny role making the movie even funnier.

The funnier roles would include films called The Cockeyed Cowboys of Calico County and Dirty Dingus Magee, both in 1970. 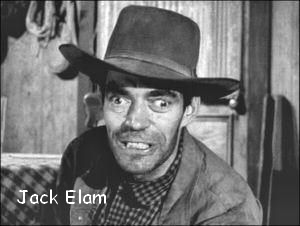 Jack did star in a few, low budget films. If you can find them, and you really don't want to, look for A Knife for the Ladies (1974) and Creature from Black Lake (1976). He fared better with Don Knotts in The Apple Dumpling Gang Rides Again (1979).

Look for him in a small part in The Cannonball Run (1981) and Cannonball Run II (1984). Those Burt Reynolds films had huge casts so it was easy to get bumped down in the credits.

After a few more stinkers with actors like Jimmy Dean, Richard Kiel and Hulk Hogan, Elam made his final film in 1993. He starred in Uninvited...which is also a stinker, but he is the star.

While Elam never really starred in anything (or anything worthwhile), he brought a lot of color to his many roles. I suggest, instead of watching the movies he made, tune in to Encore Westerns on cable and see how many times you find that trick eye of Jack Elam. It doesn't matter if you watch "The Rifleman," "Gunsmoke," "Lawman," "Bonanza," "Cheyenne," "The Dakotas," or "Temple Houston"... Jack was there.