One of my favorite early TV actresses was Spring Byington (1886 - 1971). I have no idea why, but I watched "December Bride" on TV as a child. That show was on from 1954 to 1959. Like Eve Arden, maybe it was Spring's voice and mannerism that attracted me.

I shan't (there's a word I don't use very often) give you her complete biography or details of her early career. She has a very good biography on IMDb if you are interested. But Spring wanted to be an actress starting in high school, and she made her dream come true.

After some success on Broadway, she was signed by RKO to play Marmee in Little Women (1933), starring Katharine Hepburn. Early on, she was cast into roles that would focus on her maternal character. But she showed strength and a great sense of humor, not to mention her comedic talent, in whatever she did.

In 1935 she has parts in the Charles Laughton, Clark Gable version of Mutiny on the Bounty, and for a change of pace, Ah, Wilderness! starring Wallace Beery and Lionel Barrymore. She would make five films with Barrymore.

Ah, Wilderness! was also the start of her work with Jed Prouty (1879 - 1956). Jed only had a small part in that film, but in 1936 Back to Nature was made. It was the start of 16 films about the adventures of the Jones Family. In that era, a whole series could be made about the most mundane happenings, and the movie going public ate it up. Here is the story line for Back to Nature from IMDb -

The Jones family goes to a convention traveling in a trailer. The oldest daughter gets involved with a convict, the oldest son has a love affair, and the youngest son gets into photography. Written by Ed Stephan

Not exactly a film you would see Angelina Jolie in these days. The Jones series lasted until 1940, and it helped Spring become a minor star, and certainly a known commodity in Hollywood. I know nothing about Jed Prouty, but he may become a topic for a later post.

In 1936 Spring made her only Busby Berkeley film, Stage Struck, starring Dick Powell and Joan Blondell. She also worked in two Errol Flynn films, The Charge of the Light Brigade (1936) and Green Light (1937). 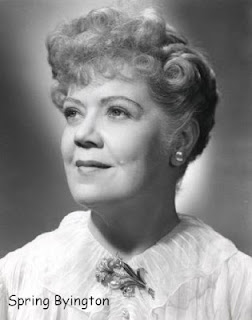 Here are a few highlight films from Spring's career -


And just as her career on the big screen seems to be winding down (she was 64 years old in 1950), she was discovered for the small screen.

Of course "December Bride" was her most famous TV role. Being the type of person she always was, she made a perfect Daisy Cooper on "Laramie" as well. In fact, Spring Byington is on many of the major television series' from "Alfred Hitchcock Presents" to her final appearance on "The Flying Nun" in 1968.

She was even Doris Day's mom in her final motion picture, Please Don't Eat the Daisies (1960). It was a wonderful career for a Bit Actress who was also a star.
Posted by Bit Part Blogger 4 comments: