I must say, William Fawcett (1894 - 1974) has always been a favorite of mine.  I think it is because the old Saturday morning TV show, "Fury," was one I never missed, and Bill Fawcett was a regular as Pete the ranch hand.

Fawcett worked as an actor from 1936 to 1972, and I believe he always looked like an old man.  He was a professor of theater and had a Ph.D., working at Michigan State University before the war.  He did appear in one movie in 1936 (The King Steps Out starring Franchot Tone) as a strongman, so maybe he didn't look that old back then.

After WWII, he decided to give acting a try as a full time career, and he went on to appear in almost 250 titles on the big and small screens.  I'll try to pick some good examples of his work from each decade.

The 1950s brought television.  Doc T. (for William Fawcett Thomas) was already working in movie serials, appearing in some Kirk Alyn (1910 - 1999) Superman episodes, and in several others, including Tex Grainger, Pirates of the High Seas, Captain Video and Blackhawk.  He started on TV as a regular on "The Range Rider" series around 1952, starring Jock Mahoney (1919 - 1989) and Dickie Jones (b. 1927).

The 1950s were his most prolific years.  He could be seen on TV everywhere, from "The Lone Ranger" to "Whirlybirds."  Did we really call helicopters 'whirlybirds?'  He also appears in No Time for Sergeants (1958) as Andy Griffith's father, and Damn Yankees! (1958) starring Tab Hunter.

1961 brought his only work with John Wayne in The Comancheros.  The next year he is uncredited in The Music Man, and he even gets to sing a line in The Wells Fargo Wagon.  I just saw him the 1964 Audie Murphy movie, The Quick Gun, but he has a very small part as the bartender.  No mistaking that face, though. 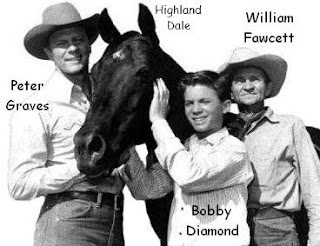 William Fawcett had quite an acting career.  He never really was the star of any movies or TV shows, but he added a lot, just by looking old.
Posted by Bit Part Blogger 2 comments: