In 1939 we find her in a strong supporting role with Jimmy Stewart in Destry Rides Again (as you know, one of my favorites), and then she makes Some Like it Hot the same year with Bob Hope.  She works with Hope and Crosby in Road to Zanzibar in 1941.  As all fans of comedy know, she played Myrtle Souse in The Bank Dick, W. C. Fields' classic in 1940. 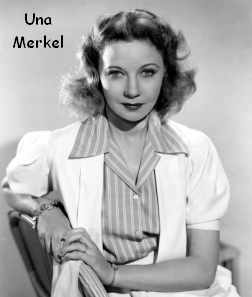 Television appearances start around 1952 in "Four Star Playhouse" and "Schlitz Playhouse."  Merkel will continue making movies and TV shows for the rest of her career.
In 1961 she is cast in the Haley Mills (b. 1946) Brian Keith (1921 - 1997) movie The Parent Trap.  She made two other Disney films, Summer Magic (1963) again with Haley Mills, and A Tiger Walks (1964) again with Brian Keith.
Una Merkel's final work of her 114 titles was in "I Spy" in 1968.  She was never a huge star, but her voice and talent, and her odd name which is apparently her real one, have kept her at the top of the Bit Actor list.
Posted by Bit Part Blogger 2 comments:

Some Women of the Silent Era, not Bit Players!

I just feel that I must mention a few wonderful actors and actresses of the silent era.  Perhaps some of my readers are young and lack the exposure to silent films.  Then again, I have never seen a Theda Bara (1885 - 1955) film, but her name is known to me.  Some of these made a few talkies near the end of their career, but I will keep it mainly silent.

Theda Bara was one of the biggest stars in the early days of motion pictures.  Her screen name was an anagram of "Arab Death."  (Kewl!)  She made 44 films from 1914 to 1926, when she married and retired from the screen.

Bara played a vampire in the 1915 movie A Fool There Was, and she became known as "The Vamp" which created the term.  In 1917 she had her biggest role in Cleopatra, which became a megahit movie.  Sadly, only about four of her films exist today.  If you get the chance to see one, it would be worth it.

Mary Philbin (1902 - 1993) made 31 movies in just eight short years starting in 1921.  Philbin has what appears to be a complete biography written on IMDb with loads of info about a forgotten star.  And she was a star.  She co-starred in the original Phantom of the Opera in 1925 with Lon Chaney, sending thousands of fans screaming from the theaters as she unmasked the Phantom.

Philbin became a recluse after she retired.  She did come back into the spotlight a few times.  She came to a memorial service for Rudolph Valentino (1895 - 1926) in 1988, and attended the opening of The Phantom of the Opera on Broadway by Andrew Lloyd Webber (b. 1948), and once more to promote a book on The Phantom by Philip J. Riley. 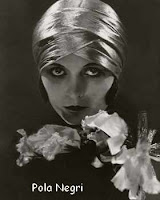 Negri has some interesting tidbits in her history.  She was engaged to Charlie Chaplin before she met Rudolph Valentino, and apparently she was Adolph Hitler's favorite acrtress.  Who knows for sure?

Purviance was kept on Chaplin's payroll all of her life, and I am sure many have wondered if she was more than just an actress for him.

There are just a few names above, but they are important names.  People like that were the foundation of what movies have become.  Their work has inspired many, and even their looks have created styles that lasted.  And they were easy on the eye!
Posted by Bit Part Blogger No comments:

I don't believe that Barry Nelson (1917 - 2007) was ever much more than a Bit Actor, at least on film.  He was a well respected actor on Broadway and television, and no one would deny that he had great talent.

Also in 1942 we find him working with Lew Ayres (1908 - 1996) and Lionel Barrymore in Dr. Kildare's Victory, and then with Abbott and Costello in Rio Rita.  The war years brought some war movies.  Bataan and A Guy Named Joe in 1943, and Winged Victory in 1944.  Winged Victory has a great cast and is something I will look for.

Barry starts early on television in 1948.  He is in several teleplays on "The Chevrolet Tele-Theatre" and "The Ford Theatre Hour."  Do you think spelling it 'Theatre' adds some class to the small screen?  I believe those years were the start of the best part of Nelson's career.

The 1950s and 1960s see him in all sorts of television roles, including "Zane Grey Theater," "The United States Steel Hour," "Twilight Zone," "Kraft Suspense Theatre," several with Alfred Hitchcock, and of course "Love, American Style."

Barry's last film was The Shining in 1980.  Anyone who can hold their own with Jack Nicholson is OK with me, and worthy to be mentioned as a great Bit Actor.
Posted by Bit Part Blogger No comments:

I watched most of TLHG last weekend.  I wasn't sure, but I thought I saw Denver Pyle (1920 - 1997).  His name is listed in the credits on IMDb.  That brings up a point.  When I go to the theater, I always stay until all of the credits roll.  Do you?  It is amazing how many people it takes to make a movie and they deserve to have their name read by someone.  When The Left Handed Gun played on TV (one of the western channels, I think) they sped up the credits, and then shrank (Is that a word?) them down to run an ad at the same time, making it impossible to read.  I hate that.

Back to Denver Pyle.  He has 259 roles spanning 50 years.  He should be recognized.  He may even rate his own B. A. Blog post soon.

I don't think any of the actors highlighted above would be considered stars in their own right, but it can't be denied how much they contributed to movies over the span of their careers.  Next time you go to the theater, don't forget to read the credits!
Posted by Bit Part Blogger No comments:

William Sanderson (b. 1944) is from Memphis, Tennessee, and the accent does him well.  He started out on the stage in NY, and proceeded to TV and movies.  He now has 113 titles listed on IMDb.

His first two films in 1977 were foreign, one in Italy and one in Japan.  I have no idea how that came about.

In 1991 he was in the Disney feature, The Rocketeer, a throwback to the 1930s.  But not all his films were hits...or even good.  Skeeter (1993) was about giant, mutant mosquitoes, with the tagline, "Earth is the Final Breeding Ground."

Sanderson also kept busy on TV in several series' including "Deadwood" in the mid 2000s.  He has quite a filmography, but if you see him acting, you just can't quite remember his name.  The sign of a good Bit Actor.
Posted by Bit Part Blogger No comments:

In my group of friends, she is remembered for her six films with Laurel and Hardy.  She also made two with the Marx Brothers, Monkey Business (1931) and Horse Feathers (1932).

Thelma started out to be a teacher.  Her mother encouraged her to enter a beauty contest and in 1925 she became Miss Massachusetts, and went on to the Miss America contest.  She didn't win, but it opened up some acting opportunities. 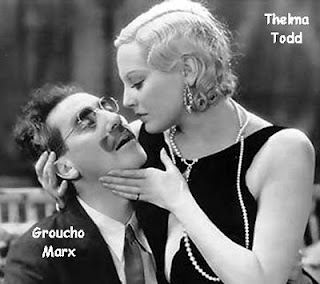 Of course, Thelma Todd will mostly be remembered by L&H and Marx Brothers fans.  She died mysteriously of carbon monoxide poisoning in her garage.  It was ruled a suicide, but there is a murder theory that cannot be proven.  It was a tragic loss by all accounts, and one that confines Thelma to the Bit Actor category forever.
Posted by Bit Part Blogger No comments: